This is a question that varies to a certain extent based on the context. In terms of ‘Is a wood burning stove green compared to other solid fuel heaters’ – there is reason to wholeheartedly state “yes” in response. Why?

In wood-burning terms the positive argument is that a tree will consume CO2 as it grows and release it again only when it is combusted. It will not release MORE CO2 than it consumed provided it is allowed to grow and mature. Therefor it can be considered ‘carbon neutral’.

Being ‘sustainable’ is closely aligned with being ‘green’ as it supports the notion that we (humans) should avoid processes which strip the earth of resources that cannot be (or cannot easily be) replaced.

Good tree management schemes allow us to generate a fuel supply indefinitely. As trees are harvested, more are planted to ensure that the CO2 emissions continue to be absorbed and that there is a supply of fuel in the future.

This is not a process that can be managed with Oil, Coal, Anthracite or Gas which have ‘finite’ limits in terms of supplies available for consumption in the future. 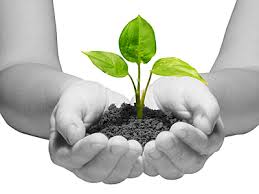 Burning wood in an efficient ‘wood-burner’, improves dramatically the amount of energy that is extracted from the fuel and passed on to the user as heat in comparison to a traditional fireplace. This is good – less fuel consumed, therefor less CO2 produced to achieve the same heat in the home.

Most decent wood-burners offer around 75% efficiency ratings meaning that only 25% of the energy in the wood is wasted in terms of ash and lost heat up your chimney. These ratings exclude the heat that is radiated from an exposed flue pipe in the room which will raise the efficiency still further as you are harvesting yet more of the energy that would have been lost up a traditional chimney. The same measures applied to some traditional open fires yield as little as 15-20% in terms of efficiency.

Accordingly, some experts state that a wood burner will consume approximately 25% of the fuel required by a traditional open fire. This means that whilst your fire is still making ‘CO2’ it is making it at a much slower rate. 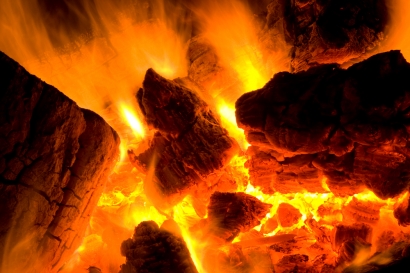 In Europe, particularly the UK, there are tight regulations on the use of solid fuel heaters in high density areas. There are laws which make the production of air pollution illegal.

Smoke reduction kits cleverly control the air intake on a stove by preventing you from ‘starving’ the fire to such an extent that the fire ‘smoulders’ producing excessive amounts of smoke.

Bear in mind that when your fire smokes, you are wasting fuel that would otherwise have been ignited so burning your stove at the correct ‘rate’ is good for maximising the heat from your stove and reducing the air pollutants that would go up the chimney as heavy smoke. 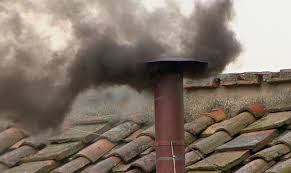 Perhaps this one is the most easily open to debate. However, through the use of an integral ‘boiler’ a stove can heat hot water that can be used to transfer heat to radiators, underfloor heating and hot water geysers.

When done using a ‘gravity fed’ system, the system does not require a pump (for hot water heating only) which means no additional electricity required either.

All in all, by no means are wood burning stoves the ‘perfect’ heating solution in terms of ‘Green’ sensitivities and, no doubt, future developments will enhance the technologies to make them cleaner and more efficient. However, there is definitely merit in the use of a woodburner compared to other solid fuel heaters right now.